The Fremont neighborhood in Seattle has many claims, including being home to the Troll, the Solstice Parade and title of “Center of the Universe.” It is adding one more claim: home of an innovative, large-scale, green-infrastructure project capturing polluted water flowing off of the Aurora Bridge.

This project is innovative for many reasons: the scale, the level of voluntary investment by a private developer, the intersection between transportation and green infrastructure, and much more. But at the end of the day, it comes back to the pollution in the stormwater flowing into engineered gardens. This project will be capturing and cleaning some of our region’s dirtiest water — and ensuring it doesn’t flow into Lake Union, negatively impacting the migrating salmon heading to North Lake Washington and Sammamish watersheds. 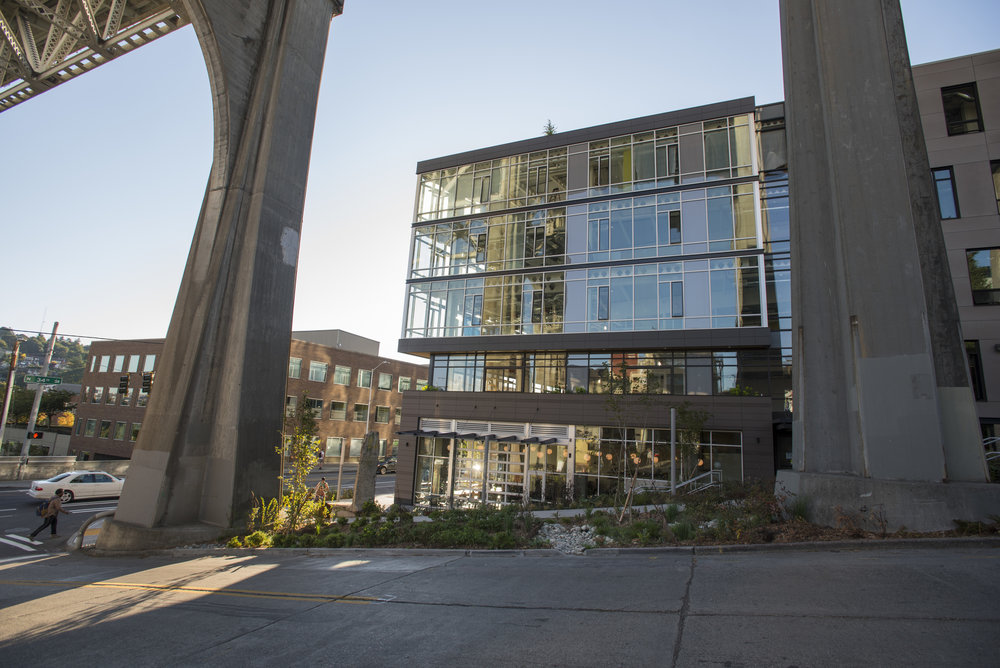 A Developer Learns About Stormwater

Mark Grey, the Principal of Stephen Grey &Associates, usually starts this project’s story with a description of a videoabout salmon fry dying in the stormwater runoff from the Highway 520 Bridge, sent to him by Jeremy Febus of KPFF. When he saw that video, he knew he wanted to do something — and as a developer with a building under the Aurora Bridge in the works, he was in a perfect position to do just that.

The water coming off the Aurora Bridge is in bad shape.In winter 2017,water-quality samples were collected from a downspout coming off the bridge to provide a baseline. The results were a surprise even to Salmon-Safe specialist, Richard Horner, who has sampled runoff from highways across the state and nationwide for more than 40 years. For example, the National Stormwater Quality Database has a Total Suspended Solids (TSS) baseline of 99 mg/L. The median for the Aurora Bridge samples is 567 mg/L. The results were similar for the other variables they tested —such as zinc, copper and lead. Much of this is currently flowing untreated into Lake Union and the Ship Canal while another portion is flowing into the overburdened combined-sewer system — the same system that overflowed this spring when Seattle’s West Point Plant experienced systems failure.

This is the same story for much of the rain that falls in the city. In an average city, 25 to 35 percent is a “right of way” — a road, highway or sidewalk. And 75 percent of pollutants in Puget Sound are coming off these hard, urban surfaces.This pollution impacts human health, salmon and our beloved orcas. Southern resident killer whales are on a course headed for extinction — key contributors being Chinook salmon prey shortage and high levels of toxic stormwater runoff affecting immune systems, health and reproductive rates.

Cleaning up bridge and road runoff in a dense urban area like Seattle can be daunting. But the project team had the vision to match the challenge of this particular bridge with a goal of capturing 2 million gallons of stormwater runoff from the bridge through swales and rain garden landscaping engineered to capture and clean the pollution from the dirty water.

As a first phase at the new Data 1 site, Stephen Grey & Associates, Weber-Thompson and KPFF looked beyond the footprint of their building to install rain gardens in the roadside planting strip to capture runoff from the bridge downspouts. The project team sought guidance from the Seattle Department of Transportation and Seattle Public Utilities to navigate the permit process and ensure it was a successful project for all parties. The state Department of Transportation has also given its consent for the project.

Moving forward, they have the same ideas planned for two additional phases of development:the new Watershed Building that is currently in permit stages and a future 850-square-foot bioswale adjacent to the Burke Gilman Trail.

The results so far are cascading rain gardens along the west side of Troll Avenue adjacent to the new home for Tableau at the Data 1 building. The landscaping is not just good for salmon and orca, it’s great for humans,too, softening the pedestrian walkway and bringing much-needed green space to the neighborhood located under the bridge.

To manage the volume of water flowing off the bridge, the cascading rain gardens have the addition of an underground holding vault to capture runoff not retained by these features before it is released directly to Lake Union. The underway building on the east side of the street will replicate this process and even take it a step further by capturing additional runoff from the adjacent alley. The green infrastructure installed will capture 400,000 gallons of stormwater runoff when the project is complete.

Throughout these phases, Salmon-Safe has partnered with the project team. Salmon-Safe is a certification process that focuses on site-wide management practices that protect water quality and restore habitat. In addition to certifying the Data 1 site as Salmon-Safe, the organization is taking the lead on incorporating educational signage into the gardens for those who live, work and visit the neighborhood. 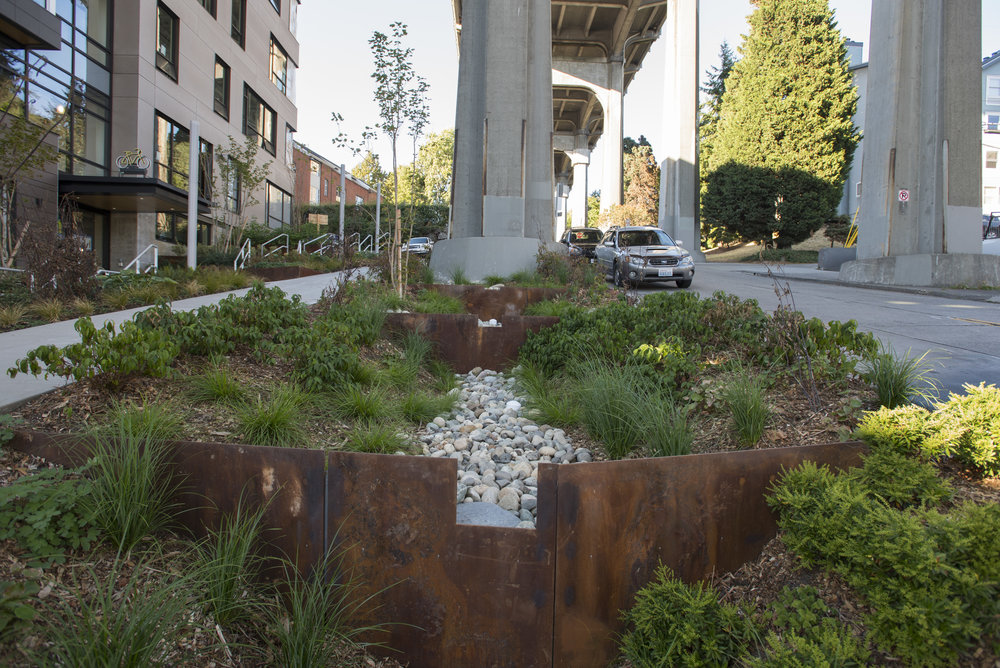 Getting to 2 Million Gallons Managed

This partnership with Salmon-Safe is even more important as they look to Phase Three. With support from Boeing and The Nature Conservancy, Salmon-Safe has been developing the case for the value of a third green-infrastructure site, capturing an additional 1.2 million gallons of stormwater runoff from the Aurora Bridge.

In addition to getting a baseline measurement of pollution in the runoff, Salmon-Safe and the project team have been working with permitting agencies within the City of Seattle and the state Department of Ecology, as well as the state Department of Transportation team, to understand what type of permitting processes and costs are involved in this stage of the project.

This phase of the project, as it is designed, will provide enhanced water-quality treatment for 98 percent of all stormwater received by the facility, removing 80 percent of total suspended solids. This is above and beyond the standard of 91 percent of total runoff set by the Department of Ecology and the City of Seattle.

Next, with continued support from The Nature Conservancy and Boeing, Salmon-Safe will lead a public-engagement process to engage those who live, work and play in the Fremont neighborhood to help design the bioswale. In addition to being in the “Center of the Universe” near businesses like Tableau, Google and Adobe, the site for this potential bioswale sits adjacent to the Burke-Gilman Trail, a heavily used bike and pedestrian path. The neighborhood impact of this project goes beyond stormwater management: adding beauty, pedestrian safety and supporting its place in the watershed. 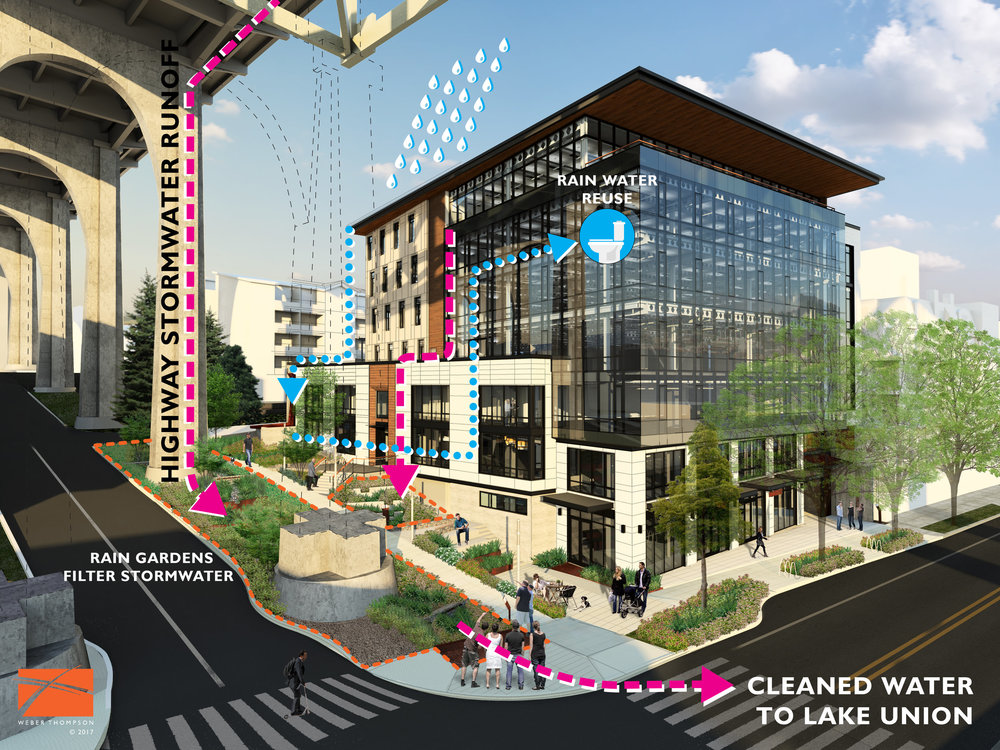 Capturing 2 million gallons of stormwater is big. But this project has the potential for even greater impact. Salmon-Safe and the project team are learning about the permitting challenges for these types of large-scale projects — and how to work through them. Through this process, Salmon-Safe and the rest of the project team will be able to ease the effort for future projects of such scale.

The project also provides a tangible example of the value of addressing the polluted stormwater flowing off bridges. This project is cleaning some of the
dirtiest rainwater runoff — and providing benefits to those who live, work and play in this neighborhood.

Finally, the project demonstrates the possibilities when developers are motivated to go above and beyond code to address stormwater management. These private-public partnerships are the wave of the future — check out this green infrastructure project from Washington, D.C., as an example. With the Swale on Yale at South Lake Union, Seattle has a precedent set for this level of leadership.

Together we can radically re-imagine cities and towns as good for nature and good for people. Puget Sound is not only a place;it’s a quality of life. It’s our home —the backdrop of our lives—where land and water meet to create diverse communities, economies and an entrepreneurial spirit that draws people from all over the world. As this region that we love continues to grow, there’s not a moment to lose.